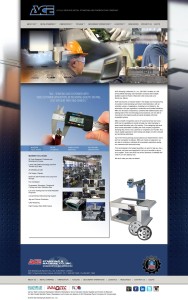 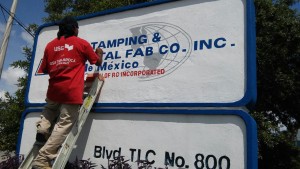 MONTERREY, MEXICO, October 8, 2015 — ACE Stamping & Metal Fab Co., Inc. de Mexico, a division of RC Incorporated, offers both high-quality precision metal stampings and innovative metal fabrication solutions for OEM's and CM's in any industry. From initial design engineering to Sub and Full Assembly, ACE delivers to clients across the world. On October 6th, 2015, ACE de Mexico was recommended to continue its ISO 9001 Certification through NQA. Thus, resulting in 11 years of continuous improvement (in Mexico) utilizing the ISO 9001 Quality System as well as officially changing the name on the ISO 9001 Certification to ACE Stamping & Metal Fab Co., Inc. de Mexico. This is very important for ACE's Mexico Division as this business unit continues to grow and supply customers worldwide. We feel that the ISO Quality System plays a huge role into our daily processes that allow ACE to continue to deliver high quality parts on time at a competitive cost. Stay tuned for the new and improved ACEStamping.com, which will reflect our new facility in Monterrey, Mexico! 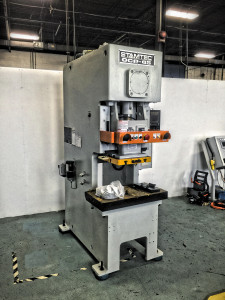 RACINE, WI, July 7, 2015 — ACE Stamping & Machine Co., Inc., a division of RC Incorporated, offers high quality precision metal stampings and sheet metal fabrication with a full featured tool room. ACE Stamping has two locations internationally, the headquarters in Racine, WI named ACE Stamping & Machine Co., Inc. and another location in Monterrey, Mexico named ACE Stamping & Metal Fab Co., Inc. de Mexico. Since ACE Stamping is registered ISO 9001, one of the main goals is to push for continuous improvement. It is very important to continue to reinvest into the company's equipment to allow customers to continue to receive the utmost quality with competitive pricing in a timely manner. As the metal stamping industry moves forward, so does the technology. Therefore, ACE Stamping is proud to announce the addition of a brand new 45 Ton Stamtec Stamping Press to its Racine facility. Since ACE continues to gain a foothold in parts that require a highly cosmetic finish, it has become very important to have equipment that does not use oil during the stamping process. This press will be dedicated solely to the numerous, highly cosmetic parts that the company stamps and ships on a daily basis. Please see press specifications below (Column L): 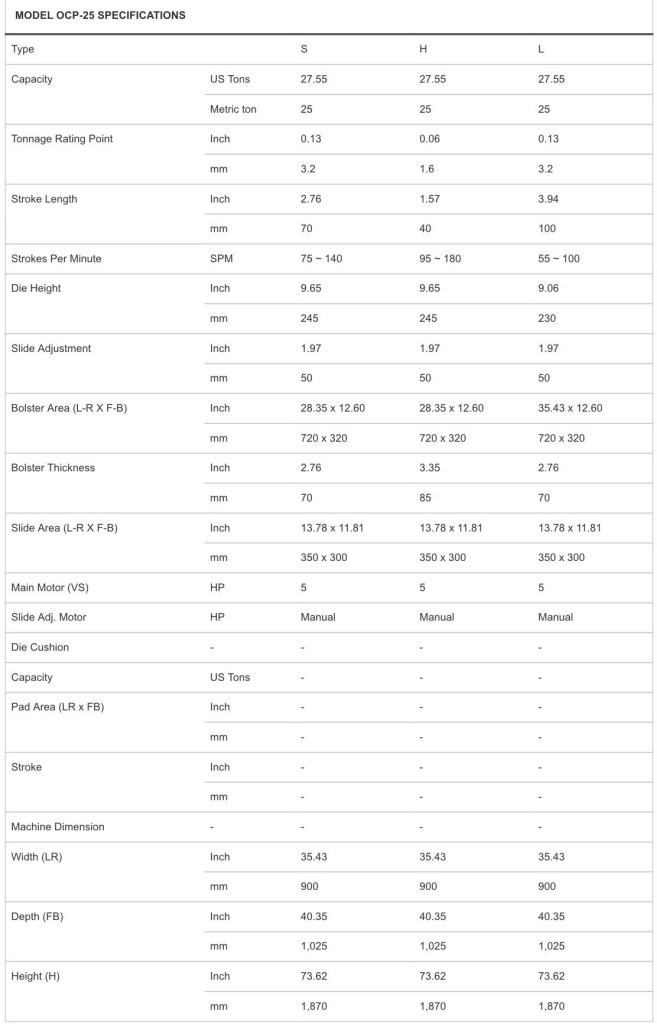 Please stay tuned as ACE Stamping is nearing the completion of a brand new website to reflect its state-of-the-art sheet metal fabrication facility in Monterrey, Mexico. 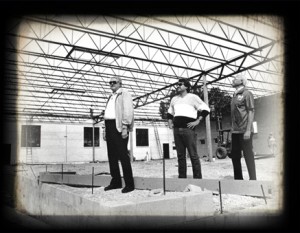 All of RC Incorporated's companies have a very humble beginning from very dedicated individuals whom put force countless hours which have allowed each company to become what it has today. However, this post puts the focus on ACE Stamping & Machine Co., Inc. as it was the founding company of the family of companies that RC Incorporated owns and operates presently. ACE Stamping & Machine Co., Inc., Racine, Wisconsin was founded in 1955 by James W. Haarsma, who at the time was the only employee. The company began in the basement of the Sattley building with one punch press and only a few pieces of tool & die equipment. James' idea of a small precision controlled stamping company with low cost tooling, skyrocketed into what ACE Stamping has become today. After years of continual growth and expansion, ACE now has two locations internationally. The headquarters is located in a 76,000 square foot facility on the South Side of Racine, Wisconsin. This facility allows ACE to ensure the highest quality by using state-of-the-art machinery and focuses mainly on precision metal stamping. ACE's newest addition to the family, is located in Monterrey, Mexico in a 30,000 square foot facility. This facility primarily focuses on sheet metal fabrication and final assemblies of products. For more information about ACE Stamping's history as well as current capabilities, locations, and examples of products, please visit http://acestamping.com/.

What is Precision Metal Stamping?

RACINE, WI, March 22, 2015 — RC Incorporated, a family owned company that consists of the following companies: ACE Stamping & Machine Co., Inc., ACE Stamping & Metal Fab Co., Inc de Mexico, Innotec of WI, and Shakespeare Machine Stamping. Each company plays a vital role in the company’s 60 year history of creating innovative products/services such as precision metal stamping, sheet metal fabrication, adhesive tape, and abrasive components. Today, the spotlight is on precision metal stamping since one of RC Incorporated's business unit, ACE Stamping & Machine Co., Inc. has offered precision metal stamping since 1955. Therefore, this leads to a simple question - what is precision metal stamping? What is the history of metal stamping? Last but not least, where is it used? Precision metal stamping is the process where sheet metal is used in either blank, strip, or coil form on a stamping press where the metal is force fed manually and/or automatically through what is referred to as a die (usually progressive or compound blank) to form a shape. Within the stamping press operation, there are multiple processes used to achieve the final product. These processes include the following: punching, blanking, embossing, forming, coining, and flanging. Although widely used on various alloys which are referred to as sheet metal, different materials such as polystyrene or harder plastic materials can be used as well. Before metal stamping, processes known as die forging and machining were being used to create products through out the world. Since die forging and machining are a much slower process than stamping, it resulted in higher expenses. Thus, leaving companies around the world searching for a cheaper alternative. Stamping eventually became widely popular in the automotive industry due to the large quantities needed in a short amount of time. Automotive greats, such as Henry Ford, fought the need for metal stampings as long as possible but since alternative processes could not meet demand, Ford ultimately needed to make the switch to the metal stamping process. Today, precision metal stamping has become a very widely used process for companies to obtain products at a low price and in a timely fashion. Metal stampings are used in practically every product in which people use on a daily basis. Examples of where metal stamping is used but not limited to are as follows: automotive, appliance, agriculture, firearm, electronics, construction, lighting, medical, plumbing, hardware, military, and much more! The industries listed above are more general examples of where precision metal stamping is used. The following products are used on a daily basis worldwide and are more specific examples: garbage disposals, cars, trucks, motorcycles, tractors, engines, power tools, refrigerators, washing machines and dryers, boats, etc. As you can see, products in which everybody in the world uses on a daily basis not only use metal stamping but need metal stamping in order to get the final product to the market. We are all touched by metal stampings on a daily basis whether we know it or not. To dive deeper into RC Incorporated's business unit, ACE Stamping & Machine Co., Inc. and its capabilities, click on the link to their website below: 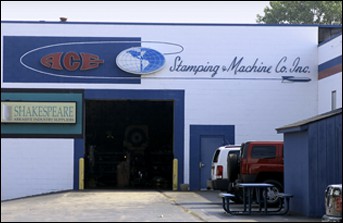 RACINE, WI, January 10, 2015 — ACE Stamping & Machine Co., Inc., a division of RC Incorporated, offers high quality precision metal stamping and sheet metal fabrication with a full featured tool room. ACE Stamping has two locations internationally, the headquarters in Racine, WI named ACE Stamping & Machine Co., Inc. and another location in Monterrey, Mexico named ACE Stamping & Metal Fab Co., Inc. de Mexico. This post is a profile only on the Racine, WI location of ACE Metal Stamping. ABOUT US: ACE Stamping & Machine Co., Inc., Racine, Wisconsin was founded in 1955 by James W. Haarsma I, who at the time was the only employee. The company began in the basement of the Sattley building with one punch press and only a few pieces of tool & die equipment. James' idea of a small precision controlled stamping company with low cost tooling, skyrocketed into what ACE Stamping has become today. After years of continual growth and expansion, ACE is now located in a 76,000 square foot facility on the South Side of Racine, Wisconsin. This facility allows ACE to ensure the highest quality by using state-of-the-art machinery. With over 50 years of experience, ACE controls the process from the beginning to end allowing you to save money while reaching the highest requirements. CAPABILITIES: With over 40 presses, ACE is able to deliver any order from prototype quantities into the millions of parts per year. We manufacture metal stampings and sheet metal fabrications of any shape or size with practically any alloy, allowing us to be flexible for our customers. With control over the entire process, ACE has a competitive advantage in part production. ACE Stamping utilizes presses with tonnage from 5 to 400 tons with the latest technology. In order to ensure a highly efficient process, ACE's stamping lines have an automated quick change as well as die protection systems to prevent any downtime. What happens to a part after it is made is just as important as how it is manufactured. That is why ACE Stamping & Machine Co., Inc. offers a wide range of secondary operations to ensure that the highest quality product is delivered to our customer. We offer virtually any secondary operation that our customers would like, thus saving you time and money.

RACINE, WI, November 5, 2014 -- ACE Stamping & Machine Co., Inc. has acquired the state-of-the-art sheet metal fabrication Mexican facility, MPE de Mexico. This acquisition has been ACE's first international exposure from a manufacturing perspective. To better serve our diverse customer base, ACE has invested in this location, now named ACE Stamping & Metal Fab Co., Inc. de Mexico to benefit customers from a logistical standpoint. This location has officially marked ACE's first endeavor in the sheet metal fabrication industry. With the experience, equipment, and high level employees, ACE de Mexico will become a great addition to the family of companies that RC Incorporated owns and operates on a daily basis. ACE de Mexico serves many industries including but not limited to: Medical, Telecommunications, Technology, Industrial, etc. Over the next year, ACE plans to add metal stamping presses ranging from 45 tons all the way up to 600 tons. With the capabilities of handling low running complex metal fabrication jobs to high running, tight tolerance metal stampings, ACE is your perfect solution for stampings and fabrication needs. Stay tuned as ACE Stamping's website gets a makeover to match our new capabilities and new facility.